The purpose of this article is to discuss the process of recording footwear impressions on film. Steps and considerations presented will be done so systematically in order to provide you, the reader a “checklist” to study in order to prepare you for this most important evidence recovery exercise.

A good quality 35mm or 120mm camera should be the focal point of any crime scene examiner’s camera bag. The camera should have adjustable f/stops (aperture settings) and adjustable shutter speeds. A standard lens would be the lens of choice for footwear photography, as a wide angle lens would tend to distort the image being recorded. Even though many footwear impressions may be photographed in daylight, a flash attachment should be mandatory. Make sure the flash has a feature allowing it to be held “off camera”, as using a flash attachment in footwear photography is always done in this manner. (This will be discussed more later.) A remote shutter cord and tripod should also be considered as standard equipment, as footwear photography is sometimes done in low light situations requiring slow shutter speeds. Remember … a good rule of thumb is to never attempt to hand-hold a camera at a shutter speed slower than 1/30th second. Finally: remember to always have a scale available and in every footwear photo you take, and the reason is obvious:

The purpose of taking a photograph of a footprint is to record it for possible future comparison/s with a suspect shoe. In order for the darkroom technician to make a scale enlargement from the negative you provide, a scale – or ruler – will have to be in the image next to the impression. The scale preferred by me is a 6″ plastic ruler in an 18% gray color. These are available from any crime scene product supply company. If you know of no such company, contact me and I’ll give you several company names.

Recording the Impression on Film

The two dimensional print often is the most difficult to recover and document through photography. Imagine the dusty print on the door as referred to previously in the “definition” section. Every one of us has probably seen one of these prints. The first step to consider in taking a photograph of such an impression is to take it from the same side on which the impression was made. Yes – you would be surprised – I have gotten photographs turned in to me of impressions which after examination I discovered were “backwards.” Three dimensional prints offer their own difficulty factors, but many of the same techniques are used as with the two dimensional print. In preparing to take the photo, I encourage you to step back a bit, take a break, and assess the situation. Remember, this may be the only chance you get to photograph what may be a most important part of the on-scene investigation. First of all, check the lighting surrounding the scene. If you are outdoors, and it’s sunny, a three dimensional print in a soft medium such as sand or snow may be rather easy. By the same token, daylight coming through the glass on which the now dusty print is found can also be an benefit. Let’s examine the latter print first.

The first thing to consider (and this goes for three dimensional prints as well) is to fill the frame in the viewfinder of the camera with the print. In other words, if you are six feet tall, don’t take the photo from a position at what your normal eye level would be. Bend over! Get as close to the impression with the camera as possible! The primary reason for doing this is that the darkroom technician will not have to enlarge the negative so much that the print would lose definition. Next, affix a scale to the glass next to the impression. In an example such as this you could use “ruler tape” which quite simply is tape on a role with ruler markings printed right on the tape. Next, load the camera with black and white or color film, preferably a film with an ASA/ISO of no faster than 100. If the print is on a glass with daylight coming through the glass from the backside of the print, this will be a very easy print to photograph. By “bracketing” the exposure (allowing for a degree of over and under exposure) the photograph can be taken with relative ease. Here’s a tip that I learned early on as I began photographing prints in these situations. If possible: have a partner stand back (and behind) the print on the glass as s/he casts a shadow on the print itself. The best means of doing this would be to actually hold a large dark cloth behind the print yet far enough away from it to still allow the daylight to strike the image on the glass. The idea of the technique is to (while still allowing the sunlight to illuminate the image) give a dark and even background in the photo which permits a non-cluttered look to the photo.

If the print is on glass indoors, or under lighting conditions so dark as to necessitate the use of a flash, adaptations of the technique are necessary, and if mastered, exceptional photographs will be realized. The biggest enemy to the photographer in a situation such as this is the reflection of the flash “bouncing” back from the reflective glass surface into the camera lens. The flash “burns” the negative, causing flashspots on the film which are then reproduced in the print. To overcome this problem, attach your flash to the camera with the aid of a coil cord and hold it (the flash) at an angle of between twenty and forty degrees from the plain of the glass surface:

When the flash goes off, it will skim across the reflective glass, illuminate the print, and not be reflected into the camera lens. Following your photography, the two dimensional print may in fact be “processed” with an instrument such as a Static Dustprint Lifter.” This valuable piece of law enforcement equipment actually “lifts” dust and dirt from a surface by means of recording film and electro-static charge. The technique used will not be discussed in this article, but you should become familiar with such a piece of equipment as you get more serious in your crime scene work.

Three dimensional prints may not have the reflective surface causing a problem as a two dimensional print would, but a print in a soft medium has it’s own difficulty factor, and that is: depth. The same equipment is used to photo these prints as the two dimensional print. What makes these impressions different is the manner in which the tread design on the surface of the sole and heel of the footwear is captured. This is done easily outdoors in existing light situations when the sunlight itself is causing a shadow effect across the print: 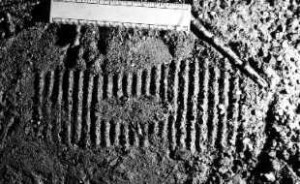 In a case such as this, merely adding a scale to the scene and taking an accurate meter reading of the existing light, an acceptable photograph will probably be obtained. (More on positioning the scale later.) When the print is itself in shadow, the need for an electronic flash to “cause” the shadow effect is necessary. As with the two dimensional print, position the flash off camera at an angle from the surface of the print. If the flash is so equipped, “test fire” the flash while you observe the print from directly above and in a position where the camera will be placed. In doing this, you may get a very good indication as to what angle the flash should be placed, and from what direction it should be originating from.

Tip … when photographing the three dimensional print, be careful to not hold the flash too close to the ground level (at too shallow of an angle.) The result of doing this would be that the flash (light) would skim across the top of the impression at such a shallow angle it would cause the impressed print to show up as a shadow in the photo.

It is extremely important to place the scale (ruler) on the same plain as the base of the impression when photographing a three dimensional impression In other words … if you are going to photograph a footwear impression found with the base one inch deep in sand, you must dig a one inch deep furrow next to the impression and place the ruler in the furrow. This is necessary in order that when making the scale enlargement, the darkroom technician will be able to obtain an accurate reproduction of the footwear impression found at the scene.

You wouldn’t wait until the night of a multi-thousand dollar loss safe burglary to learn how to recover fingerprints with the aid of black powder and a brush, would you? For the same reason, practice is the key word in preparation for footwear impression photography. Get out there now and practice. Make a number of both two and three dimensional footwear impressions. Practice photographing them using existing light and an electronic flash. Don’t let this procedure intimidate you. By practicing sound procedures, footwear impression photography will be a rewarding and a successful part of your on-scene and laboratory examinations.

A camera with adjustable f/stops (aperture settings) and shutter speeds. Electronic flash with coil cord for “off-camera” flash work. Tripod and remote cable release. A scale. Fill the frame. Position the camera directly above the print. If photographing a transparent surface, try to make the background “uncluttered.” Use a flash if necessary, but never directly “into” glass. Not too shallow of an angle in three dimensional photography.

Iowa Division of the International Association for Identification

Iowa Division of the International Association for Identification

Iowa Division of the International Association for Identification
Morning refreshment break thanks to Schwartz Forensic Enterprises. We also handed out the last few door prizes of the conference. Now we are ready to finish out the day with a case study.